skip to main | skip to sidebar

This site is part of the Halifax Missing Plaque Project. Below you will find a series off posters on Halifax history. They have been wheat pasted up on the streets, in the area the history talks about, for anyone to read.

The Project came out of the Roberts Street Social Centre's Residency Program. Toronto based activist Tim Groves, spent two weeks in Halifax working on the project. The project is based on a similar project he has been carrying out in Toronto for the last six and a half years.

please leave you comments, or send emails to missingplaque@gmail.com
Posted by Tim at 12:04 PM 1 comment: 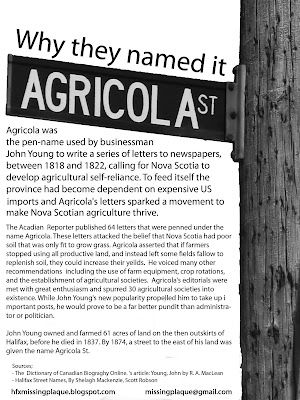 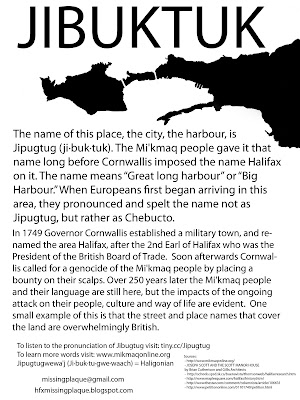 To listen to the pronunciation of Jibuktuk visit tiny.cc/jibuktuk
To learn more words visit www.mikmaqonline.org
Posted by Tim at 4:07 PM No comments:

Picketing the CBC for gay rights 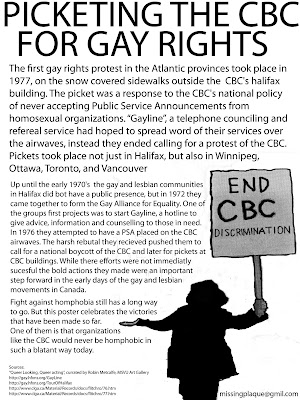 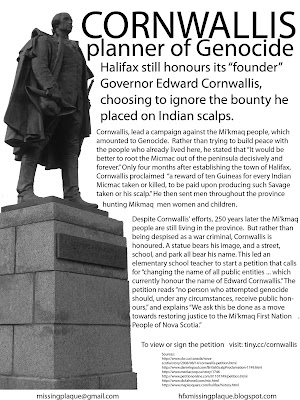 draft text of an unfinished poster

Slavery,
a part of life in Halifax

Slavery was a part of Halifax life. Many would like to deny this history by believing that slavery never existed in Halifax, or that it ended by 1792. In truth slavery existed here until 1834, only 31 years before the end of Slavery in the US. While the number of slaves in the southern US was much larger than in Canada, it was just as harsh in this country. “Enslaved Blacks in Canada were murdered, whipped, tortured, starved, imprisoned, punished and brutalized in other ways by their masters” says Aufa Cooper(1).

Slavery existed under both the French and the British in Nova Scotia. During French rule blacks and a smaller number of natives were enslaved. When the British established Halifax in 1749, they also began “importing” slaves. During the American Revolution many free blacks sought refuge in Canada, but also many white “Loyalist” brought their slaves with them, increasing the enslaved population in the province. Slavery was a fact of life right up until it was banned in the British Empire in 1834.

The end of slavery gave more freedoms to former slaves, but it did not put them on an even footing in Nova Scotia. Due to discrimination, life for free blacks in Nova Scotia had always been full of hardship. Farmers could only farm second rate land, and jobs were scarce. people to come together in communities like Africville, but by the 1960's Africville was targeted for demolition, and it population was displaced.

Slavery was a terrible blemish on the history of Nova Scotia. The face of racism has drastically changed. It has become more subtle, but in Halifax and around the Province, it is still a part of everyday life.
Posted by Tim at 4:05 PM No comments:

Unfortunately with only two weeks to make posters, only a few were made. It would be wonderful if people in Halifax took over this project and made it there own, Or if this inspired people to make their own posters, zines, street theater, radio, or anything else that brought the history to life.

Here is a list of some of the posters that would have been made, if only there was more time:
-Maroons building the Citadel
-Tall ships and slavery
-Demolished Neighbourhoods and Urban Renewal
-Africville
-Halifax Harbour for war.
-Near nuclear sub accident
-unexploded orindance
-Women's movement and anti-nuclear marches
-Riot in 80's after blacks banned from Rosa's bar
-Riot after World War II
-Riot in early days of city
-Mi'kmaq helping slaves escape
-Occupation of employment office on Gottigen Street
-Boxing and race relations
-student tent city
-student movement in the 1980's
-labour struggles
-buried creeks
-the Commons; how should common land be used...

no doubt there are countless of events in the city's history that deserve plaques made of them.
Posted by Tim at 4:03 PM No comments:

Tim
After years of doing research for activist groups, tim set him self a goal of becoming an investigative journalist. The starting point has been developing research skills and techniques. this blog is a chance to share some of what he has been learning.